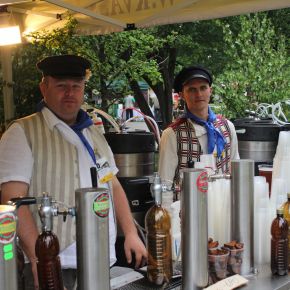 The first autumn session of the international beer festival ‘LATVIABEERFEST 2011’ in Riga, at the Swedish Gate, was started with opening of the first beer barrel on September 3 and was finished on Sunday, September 4, with honouring of the best beer manufacturers. During these two days, the greatest part of Latvian beer manufacturers, as well as various representatives of foreign beer factories offered more than 40 beer brands to be tasted by the festival guests. The Brengulu beer has been acknowledged as the most delicious beer in the year 2011, while the Valmiermuižas beer was the second best and the Tervetes beer was the third best.