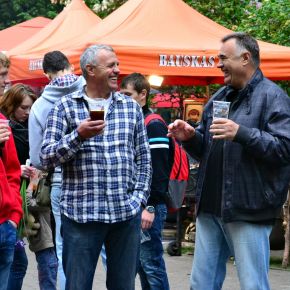 ‘I must say that the cultural behavior of our visitors was at a very high level, as we have not observed any incidents and the park territory was clean during all time of the festival activities. We are also satisfied with technical equipment provided for the festival and, certainly, with the festive atmosphere, which prevailed among our visitors and participants during all these three days. It must be certainly pointed out, that this was a significant event for beer manufacturers, while the volume of sales exceeded all expectations of our participants,’ said Guna Milusa, the „Latviabeerfest 2012” Communication Director.
During the „Latviabeerfest 2012” festival events more than 677 barrels, or more than 7 tons of beer have been sold there. According to sales performance, „Brenguļu alus” is a best seller with 106 barrels of beer, which have been sold.
During the beer festival visitors also had a possibility to become familiar with many new beer brands, such as „Ilgezeem” cranberry beer and „Rīgas Brūveris” cherry beer.
Exhibition stands of „Cēsu alus” and „Aldaris” should be especially mentioned, as these brands have been highly evaluated by visitors and had offered not only their products and qualitative food, but also various activity stands designed for relaxation of visitors.
The exhibition stand of „Kokneses miesnieks” has been evaluated as the best gastronomic offer.
The professional beer contest – degustation, which took place on May 25 at the Ligo Hall of the Riga Latvian Society Housae should be mentioned as the most significant event within the framework of „Latviabeerfest 2012” activities. This event was organized by the Latvian Beer Museum in cooperation with the Latvian Society of Beer Manufacturers and with the Latvian Association of Beer Manufacturers. The following Latvian beer factories have provided their products for evaluation at the professional degustation contest: SIA"Abula"("Brenguļu alus"), AS "Aldaris", SIA "Alus nams" ("Brālis" beer), SIA "Bauskas alus", AS "Cēsu alus", SIA "DFD" ("Rēzeknes alus"), SIA "Piebalgas alus", SIA "Valmiermuižas alus" and SIA "ZAKSI" ("Užavas alus"). The contest took place within approximately 3 hours and the event was followed by competition procedures and by discussing of beer specimens, as well as by summarizing of results. All products provided by Latvian beer manufacturers have been evaluated as very good. As a result of fierce competition, the bronze medal was awarded to ‘Piebalgas light beer’, the silver medal was awarded to ‘Bauskas dark special beer’ and the gold medal was awarded to ‘Porter’ manufactured by ‘Aldaris’.
The blind tasting, which took place during the festival events organized at the Vermanes Garden, also has been a valuable investigation for the further activities and development of Latvian beer manufacturers. The obtained results of the blind tasting show that the most highly evaluated beer brands are ‘Medalus’ (honey beer) manufactured by the „Lido” brewery, ‘Brengulu light beer’and ‘Bikeru beer’, which was provided for competition by a new beer factory – ‘Biķeru alus darītava’ (Bikeru brewery).
The „Latviabeerfest 2012” events were organized by the Latvian Beer Museum in cooperation with the Latvian Society of Beer Manufacturers and with the Latvian Association of Beer Manufacturers.
Partners of the festival: ‘Live Riga’, Latvian Association of Beer Manufacturers, Latvian Association of Hotels and Restaurants, ‘Express Travel’, ‘Travel Jam’, ‘Intelligent PR’, ‘Bura agency’.
Supporters and friends of the festval: Latvijas Radio 2, NABA, Inbox.lv, RIMI, Efumo web agency, Baltic Times, 1188, Riga in your pocket, Riga this week, Latvia.Travel, Anglo baltic news, Vesti, 7 sekretov, Tvnet.lv, Avalon hotel, TV 24/