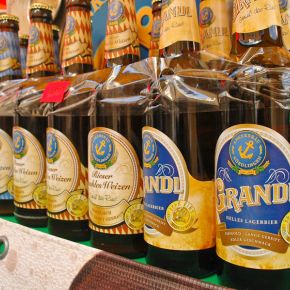 Beer is the third most popular drink in the world, just after water and tea. In Europe it is traditionally made from barley adding hops, but in the East wheat, corn and rice are also used.

The currently strongest beer for sale is registered in Germany – Schorschbock (31%), but an absolute record belongs to the Scottish brew – beer The End Of History contained 55% of alcohol.

Beer consumption in the world has reached 20 liters per capita per year, in Latvia – 67.1 liters, but in the state of beer the Czech Republic - 160 liters per capita per year. The total turnover of the beer market is estimated at 300 billion dollars per year. The older written recipe is a beer recipe. It is written on Sumerian plates and its age is 4000 years. Sumerians were engaged in brewing already in 6000 BC.

In contradistinction to other countries’ beers American beer is mostly made from rice. Due to the fact that Americans mostly like light beer, not too explicated taste , it is one of the reasons for high consumption of beer also among women.

In the ancient Babylon brewer women took the role of temple priests. Goodness Siduri was a beer patroness.

Every year more than 35 billion gallons of beer are sold. It is impressing to compare that to water consumption that is around 46 billion gallons per year. These figures are not too far away from each other, aren’t they?

In Japan, beer has been sold also in vending machines on the streets and in train stations.

If a person is collecting beer bottles, he is called a labeorfilist, but the one who collects beer pads is called a tagestolog

George Washington has had his own beer brewery in Mountvernon.

Beer companies in the USA spend almost billion dollars per year for commercials.

All the  information is taken from publicly accessible facts about beer history.