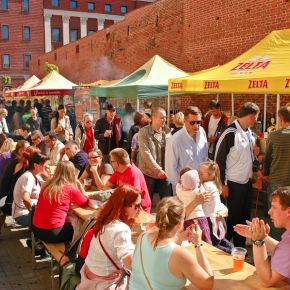 The exhibition-festival "Latviabeerfest 2013” represented by the beer manufacturers and kinds of beer to choose will be absolutely the largest in the Baltic states this year.

This year it is planned that the exhibition-festival “Latviabeerfest 2013” will be the largest and most popular beer culture discovery, recreation and entertainment event not only in Latvia, but also all over the Baltic states. Taking into account that this is only the 3rd year having this festival, it develops really fast, and in the beginning of this summer variety of kinds of beer and wide recreation program will be possible to enjoy in a completely new level", says Communications Director of the exhibition-festival “Latviabeerfest 2013" Guna Miļusa.

The main sponsor of the festival: Viking Malt