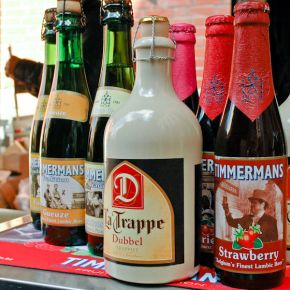 There is no consensus if brewing skills came to them from the Middle East through the medium of the trader nation (Greeks and Phoenicians) from Mediterranean or they cultivated them. Beer brewing which in the Central Europe and North Europe was spread from Germanic territories also indicates similarity of the word “beer” in many languages, which is recognized by the ancient Proto-Germanic language root aluth: English ale, Scandinavian øl / öl, Finnish olut, Estonian õlu, Slovakian ol, Latvian and Lithuanian alus.

Beer zenith in Europe occurred around the 5th century BC, when the Germanic Barbarians whom the Romans centuries were watching from above destroyed the powerful state and became as governors in its borders.

For the Medieval Europeans beer was important not only as inebriety means – it was comparatively boldly drinkable because in the process of brewing it was boiled, so there were less chances to get infected.

In the eyes of the Medieval doctors beer did not get special consent because doctors thought it is not good, or Greek and Arabic doctors did not write about it at all – the most important authority in medicine at that time, author of the tractate of medicine Aldobrandino from Siena, wrote that beer is bad for head and also for stomach, it causes bad breath, damages teeth and, of course, intoxicates. In fact, beer helps to get white and smooth skin, and also is a good diuretic.

Beer is full of nutrients. Especially, monks who had to restrict their nutriment in the time of fasting evaluate it, but there were no limits for beer drinking. Exactly monks were the first ones who developed beer brewing skills, brewing beer for their own needs, as well as treating monastery pilgrims. As a result, bishops and abbots decided to increase their own budget in this way, and pubs appeared at the monasteries. Monastic brewery beer was comparatively cheap because their advantage was cheap workforce, cheap raw material (in kind paid tithe) and exemption of paying any taxes. Several monastery breweries in the 10-11th century reached very significant levels of production.  Monastery brewers had one more advantage – the best chances to develop technologies. At that time, monasteries were science and education centers, where research and knowledge conservancy traditions were cultivated. Naturally, those monks recorded their discoveries of beer brewing and left them for further generations.

At the same time, secular suzerains evaluated beer brewing as earnings, as well, and in the Southern Germany along the monasteries brewers appeared, as well, landlords maintained breweries which only in long term could little by little approach the brewing skills of the monks.

While in the Southern Germany, city landowners became the main competitors of the monastery monks.

Among these Medieval beer brewing technology pioneers the great thinker, writer and composer of the 12th century is also mentioned, Benedictine abbot Hildegard of Bingen who has left the first written statement about using hop in brewing. Although there are historical facts that hops around monasteries were cultivated exactly for brewing already in the 8th century. However, the triumph of beer brewing came after several centuries.

In the Medieval Europe the choice of beer additives was very fascinating in its diversity. It is worth mentioning that not only barley but also other grain or even legume sorts were used for malt in that time. Quite popular was mead in which honey served not only as alcoholic fermentation material, but also as a sweetener. For betterment of taste all kind of plants were used. In historical evidences spices are mentioned – juniper berry, nutmeg, ginger, caraway, and plants which nowadays we are using for herbal teas – milfoil, various mints, even that rare additives as oak bark, pine needles, spruce buds. It has to be mentioned that a Medieval European was not unfamiliar to that kind of beer additives that heightened the intoxicating power, namely – plants with the narcotic effect. It is known that henbanes, marshmyrthes and marsh tea also were added to beer.

Nowadays, as well, in Latgale a motive come across “marsh tea for scent" somewhere in the level of stories  which is the backwash from those early times.

All the information is taken from publicly accessible facts about beer history.